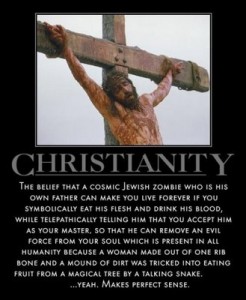 I love this poster, the caption says “Christianity: The belief that a cosmic Jewish zombie who is his own father can make you live forever if you symbolically eat his flesh and drink his blood, while telepathically telling him that you accept him as your master, so he can remove an evil force from your soul which is present in all humanity because a woman made out of one rib bone and a mound of dirt was tricked into eating fruit from a magical tree by a talking snake. … Yeah. Makes perfect sense.”

On a side note, my oldest daughter (I mentioned she likes going to church youth groups) was caught amidst a rather amusing battle the other day. She visits two churches regularly for youth group, a Mormon Church and some Christian Church- I forget the denomination. Anyway, several of the kids go back & forth. The pastor at the Christian Church last night decided to attack Mormonism with several Mormon kids in attendance. This is the same guy who spent over an hour lecturing the kids about why life is meaningless, using Biblical quotes as proof that our happiness in life is irrelevant. Way to go, dude. He also gave a lecture to teach the kids that If you believe in Jesus, you go to heaven. If you don’t believe, Jesus respects that decision and you go to pergatory where Jesus discusses the matter with you & you have a chance to change your position, but if you’re not sure about it, then you’re the worst scum of the earth and you go straight to hell when you die, for being a spineless coward.

Anyway, the Pastor’s anti-Mormonism speech to the Mormon teens was apparently amusing, my daughter came home with his 35 page packet of anti-Mormon dogma and attempted to fact-check it for historical accuracy and verbiage. This pastor has a habit of using several different versions of the bible for his quotes, so that he can say what HE wants to say. I’m glad my daughter’s just there for entertainment and to hang out with her friends. It’s amazing the amount of stress and passion these people put into all these made-up stories.

On another side-note, as predicted, I’m getting a lot of responses to Stupid Christian Facebook Statuses. Some are funny, one just makes no sense at all. I think she said I was “worshiping rocks” or something.

One thought on “Relax, we’re making all of this up”